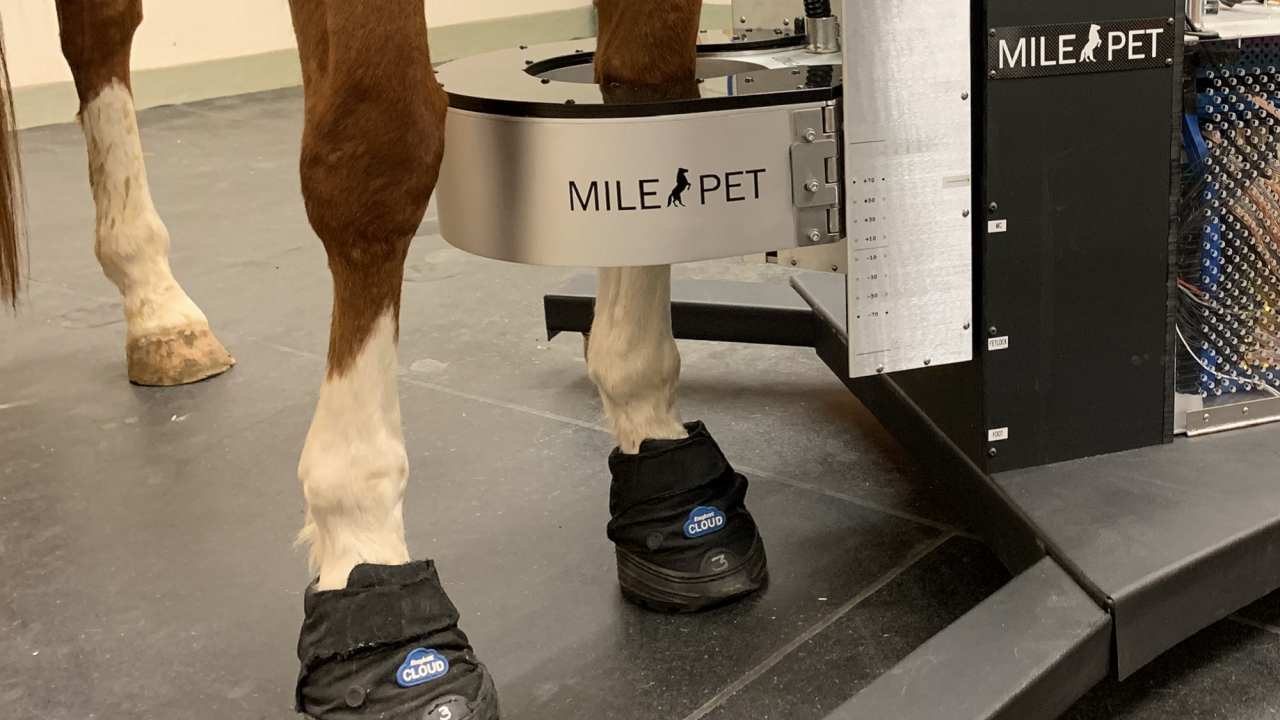 Standing Equine PET Now in Clinical Use at UC Davis 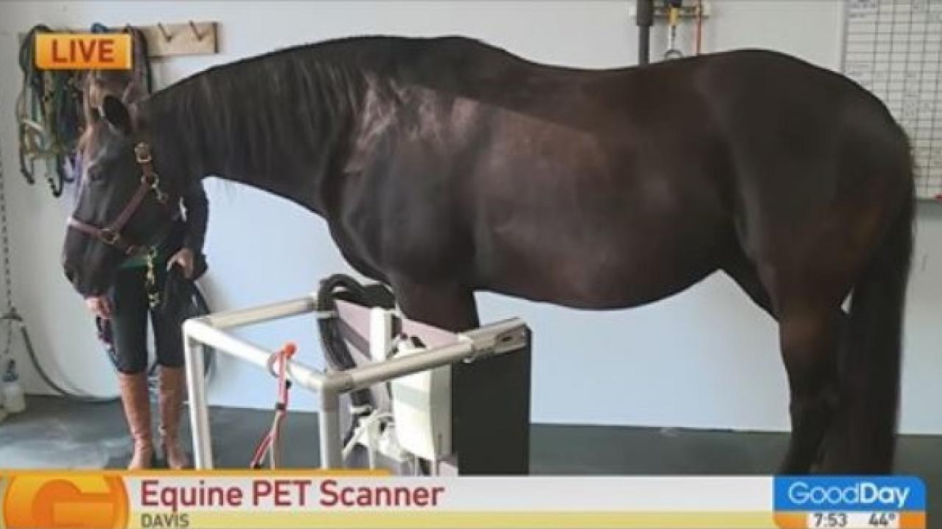 This article was originally published at UC Davis Center for Equine Health.

UC Davis has welcomed the latest standing equine PET scanner, the MILEPET, into clinical use, less than six years after performing the world’s first PET scan on a horse.

Thanks to funding support from the UC Davis Center for Equine Health and the Stronach Group, the UC Davis veterinary hospital recently installed the most recent MILEPET. After the installation of the first scanner at Santa Anita Park racetrack, a second scanner was set up on the East Coast at the University of Pennsylvania. This newest instrument at UC Davis will provide the most innovative equine imaging technique using only standing sedation to the Northern California horse population.

Since the first equine PET scan was performed at UC Davis in 2015, there have been many other “firsts” as the team, led by Dr. Mathieu Spriet, worked to develop the use of the technique to improve detection of injuries in equine limbs. The first standing PET scans were performed two years ago, removing the need for horses to undergo general anesthesia during imaging. Subsequently, our group validated the first scanner designed specifically to image horses prior to its installation at Santa Anita in Southern California. This scanner has now been used for over 200 studies at the racetrack, contributing to reducing the number of catastrophic injuries in racehorses. 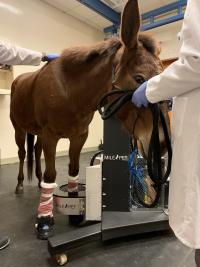 A mule named Jool, who officially has the longest ears of any PET patient to date, was the first to be imaged with the brand new MILEPET scanner. A well-known patient at UC Davis, Jool has been suffering from chronic tendon lesions that had initially improved with the use of stem cell therapy. Recently, her lameness had recurred. The goal of the recent scan was to assess whether the tendon was still the main issue or if other injuries had developed. The PET scan demonstrated that, in addition to the tendon lesion, the navicular bone, a small bone in the horse’s foot, was also part of the trouble. PET demonstrated a spot of active bone turnover that was not apparent on the MRI. This finding led to modifying Jool’s shoeing in order to protect her navicular bone. 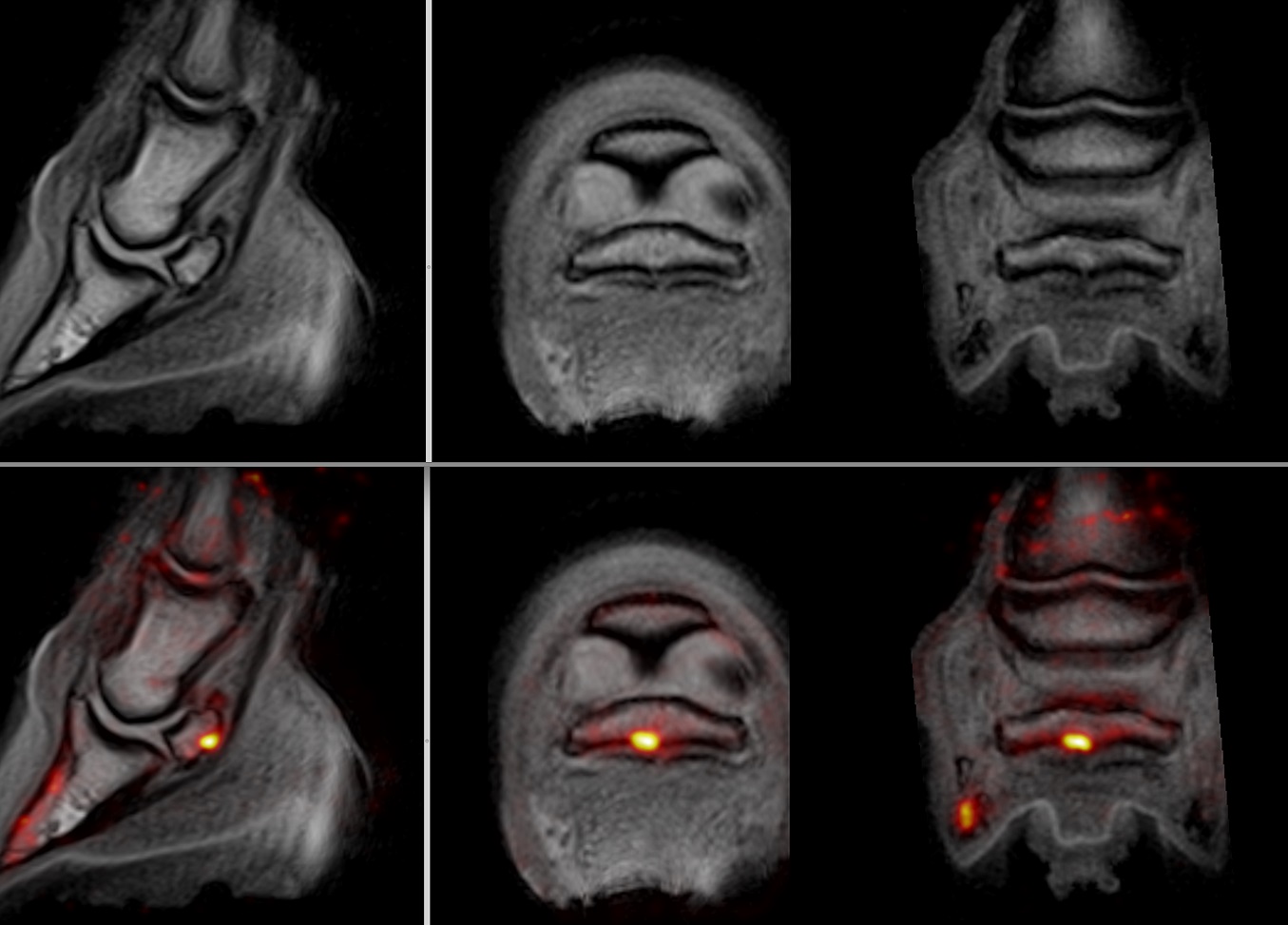 Images from Jool’s foot. The top row are MRI images, the bottom row are PET images overlaid on the MRI images. The bright yellow spot demonstrates a bone injury in the navicular bone that was not recognized on the MRI.

For the past five years, the UC Davis veterinary hospital’s robust equine clinical program has imaged over 100 horses, but until recently, all of these scans were performed with the piPET, a scanner originally developed to image the human brain. This program accomplished several milestones in the development of equine PET, establishing applications not only for racehorse safety, but also for diagnosis of bone and soft tissue injuries in sport horses and improved understanding of laminitis. The clinical use of the technique was limited due to the requirement to anesthetize horses, which increases costs and risks associated with the procedure.

The initial clinical case utilizing the new scanner at the UC Davis veterinary hospital was another first, a mule named Jool (see box at right). She was the first patient included in a clinical trial aimed at combining standing PET with standing MRI to provide the most advanced imaging for foot lameness in horses (or mules). 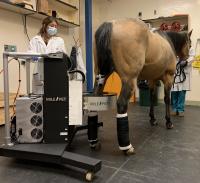 Another example of a case scanned with the MILEPET3 since its installation at UC Davis was a Quarter Horse with lameness localized to the hock but no definitive answers on x-rays and ultrasound. This mare was the first to have standing scans of the hock performed with the MILEPET. The scans were successful and demonstrated early joint disease that was responsible for the pain. The PET results helped target the exact area of the joint to inject.

The image to the left is one of the obtained PET images. The yellow area indicates abnormal bone. When overlaid with the X-ray (middle image), it shows that the injury is centered on one of the small joints of the hock, despite minimal changes on the X-ray (image on the right). With this information, the abnormal joint was infiltrated to alleviate the pain.

In addition, a second standing PET study is underway, aimed at assessing the progression of laminitis. Laminitis is an extremely debilitating disease that can unfortunately be fatal. Laminitic patients require long-term, careful hoof care performed by an experienced farrier. UC Davis veterinary hospital farrier Shane Westman has a long list of these challenging patients. In order to manage the trimming and shoeing optimally, Westman relies on imaging techniques. In a pilot study performed on laminitic cases at UC Davis, PET demonstrated its value in precisely assessing the involvement of the soft tissues of the foot with laminitis. As PET now becomes available using simple sedation, it simplifies the use of the technique and allows for repeated scans every time a patient comes for shoeing and trimming.

In addition to these two specific clinical research studies, standing PET is now available to any equine patient in Northern California. Standing PET can image any area of the limb from the foot to the carpus (knee) or tarsus (hock). (See box about the first hock imaged with this scanner.)

The racehorse population of Golden Gate Fields racetrack will also benefit from the new PET scanner. As the technique has quickly gained in popularity at Santa Anita Park, a few Northern California racehorses have traveled south to be imaged with PET. Now these horses won’t need to travel so far. In addition to being in operation at UC Davis, the MILEPET scanner will soon be transported on a weekly basis to image horses at the equine hospital at Golden Gate Fields.

Dr. Spriet was very enthusiastic about these latest developments in the UC Davis equine PET program, “The standing PET scanner will allow us to offer this cutting-edge modality to more cases than we could before. Repeating scans on the same patient will help us optimize treatment and rehabilitation for better outcomes.”

“Through support from our donors and endowments, we have been able to support the equine PET program at UC Davis since 2016 by providing both research and equipment support,” said Dr. Carrie Finno, director of the UC Davis Center for Equine Health. “It is incredibly rewarding to see this technology now being used to prevent catastrophic injuries in racehorses across California.”

More horses, and mules, will be scanned in the near future!

The advancement of PET scan imaging and research will play an important role in the future Veterinary Medical Center (VMC) at UC Davis. Advanced imaging for horses in the new All Species Imaging Center will be fundamental to patient care in the new Equine Performance Center. Our equine patients will benefit from the center’s ability to open new avenues to improved performance through the application of clinical research.

Video: A View into the Future of UC Davis Veterinary Medicine with Dean Michael Lairmore