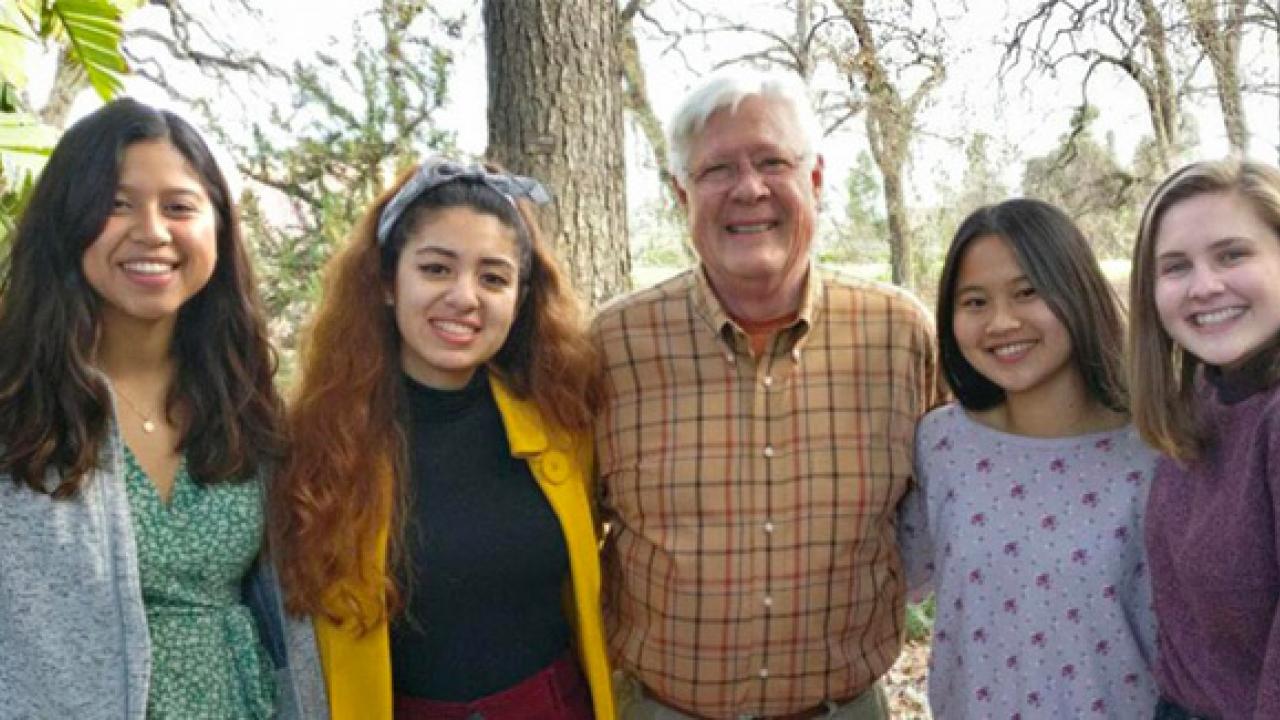 Pinkerton Prize winner Amber Medina ’19 compares the award to a seed that grows into a tree and bears fruit— a fitting description for an annual honor given to three exceptional UC Davis Arboretum and Public Garden interns.

When donor Bret Hewitt ’76, M.A. ’83 meets with the annual winners, he sees the bearing of the fruit. Hewitt and his late wife, Deborah Pinkerton ’77, created the Pinkerton Prize in the early 1990s to fund stipends for exceptional Learning by Leading™ education interns and to honor Pinkerton’s career as the Arboretum’s first education employee.

“The Arboretum is very special to Deb and me,” Hewitt said. “Deb would host buses of kids from Winters, Vacaville, Woodland and Sacramento to teach them about plants and wildlife.”

“The three years at the Arboretum and Public Garden have been really great and I love what I do,” Verdugo said. “I don’t think my experience at UC Davis would be anywhere near the same if I didn’t have the internship.”

This year’s Pinkerton Prize winners all came to UC Davis with set career plans, but have pivoted to education thanks to their fruitful Learning by Leading™ experiences. The program offers quarter-long and school-year long internships in which students work in a team to solve real-world problems in the Arboretum and Public Garden.

“My team and I created large-scale educational events catered toward environmental awareness and sustainability,” Medina said. “I initially wanted to go into urban planning, but I realized engaging with the kids and with diverse groups of people—seeing them retain environmental education—is really rewarding.”

Groff says she was initially drawn to sustainable environmental design at UC Davis after taking an environmental science class in high school. However, through the internship program, she found a new passion in museum and public garden education and plans on pursing this field after college.

"What I love about this internship is the ability to use interpretive signage to educate not only people on campus, but also the wider Davis community, about the environment,” Groff said.

“For example, one of my favorite projects was creating tree tags that were placed around campus during Earth Day that shared facts about the trees like, 'This tree gives back $137 per year.’ The City of Davis loved the project so much that they asked us to place tree tags throughout downtown to explain environmental health and urban forestry.”

During Verdugo’s internship, she and her team created three pollinator investigation stations focused on native species found in the Yolo County area: moths, bees and hummingbirds. Verdugo was able to apply her human development knowledge while educating various age groups through interactive games and arts and crafts.

Learning by Leading™ creates unforgettable experiences while allowing students to explore unique careers. Medina’s three years of dedication to the internship has led her to UCLA to earn her teaching credential in the fall. She credits the support of donors like Hewitt for her rich undergraduate UC Davis experiences.

“Mr. Hewitt’s generosity and kindness allows us to do more generous and kind things for a bigger audience,” Medina said. “We’re so grateful for everything he does and other donors alike who put into our program.”

Investing in their future through competition